Nat and I threw a baby shower today for our friend Jessie and her husband Marco. (Apparently, as this is their third, it should be known as a “baby sprinkle.” I did not know this was a real term? How am I even a real woman?)

Baby showers (sprinkles?) aren’t really my thing, but Jessie and our mutual nanny,  E, are my thing. E is with us on Friday, and are with Jessie’s children Monday through Thursday. E told me a few months ago that she would really like to do something for Jessie so I was like, “Sure.”

I agreed because I love E and would do anything for her. She is magic. She is loving and helpful and hardworking and pleasant and loves my children with a fierce devotion. She is sunshine and light.

The same goes for Jessie. 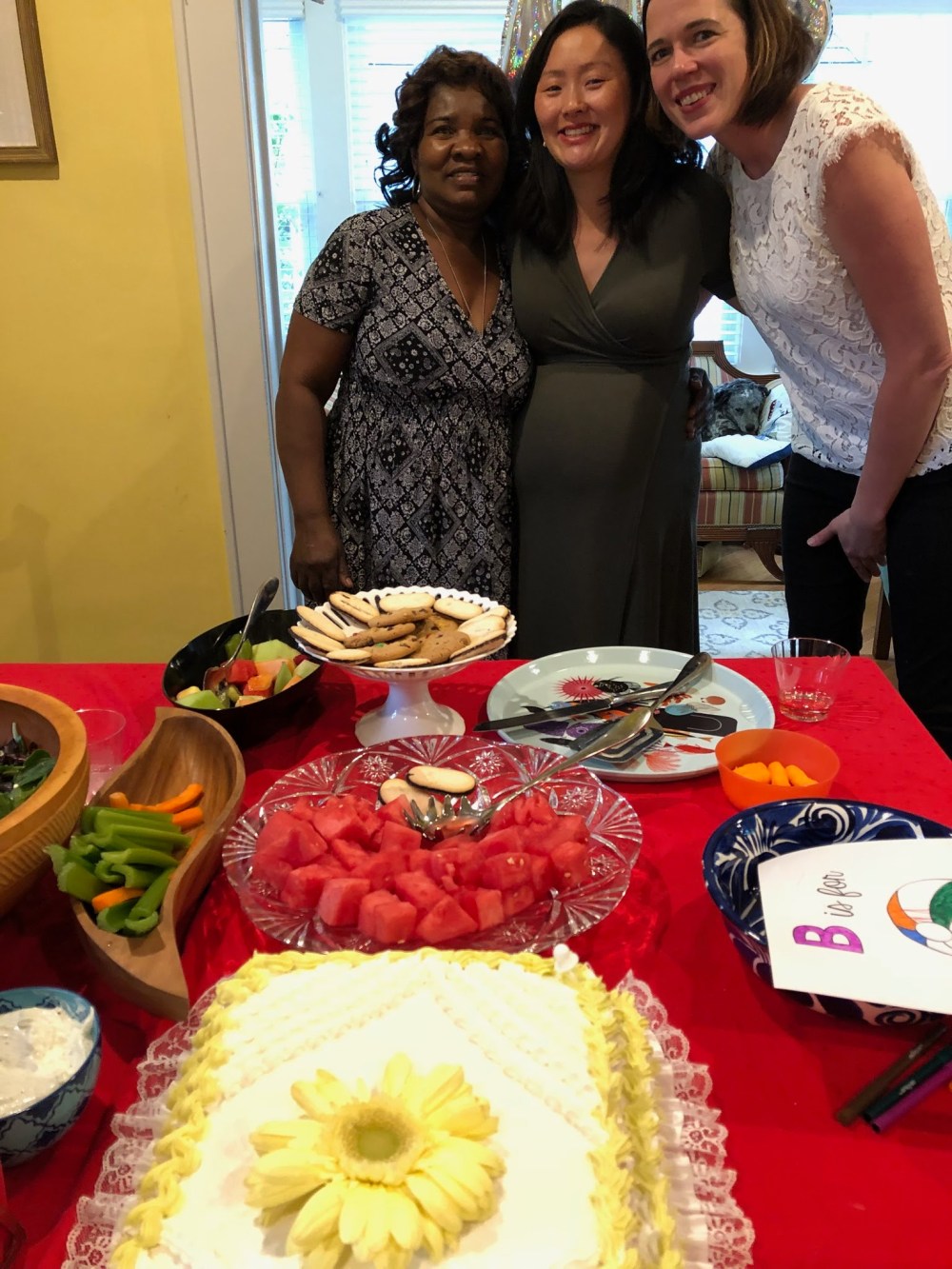 E, Jessie and me. Why my hand appears to be in that position, I do not know.

So E came by this morning with Jessie’s mom to help us get ready for the kids / ladies (prayer hands emoticons for older women who help young Moms get their house in order). And the entire time, E and Jessie’s mom giggled about how Jessie did NOT WANT A BABY SHOWER OR SPRINKLE OR WHATEVER THEY ARE CALLED.

And we all laughed and laughed while we prepared the exact thing Jessie did not want.

(I will say here that Jessie was a very good sport about it all — she’s really the best — and had a good time which is saying something when you are hugely pregnant with two little kids in tow.)

Last weekend, we threw a birthday party for Sam (I can’t stop entertaining! I’m practically Martha Stewart over here!). When I sent out the invite, I was coming off of two full days of cleaning out the basement / garage and throwing out / sorting tons of toys, and maybe I was a bit …. forceful in asking that people do not bring gifts (except for family members…they always have to bring gifts).

Friends, 95% of attendees brought a gift. We even had a little BBQ before the party for our neighborhood friends and in my text to my neighbors I prefaced NO GIFTS.

Everyone. Brought. A. Gift.

Like, I served them hot dogs and birthday cake from a mix! And the gifts were wrapped and everything!

It’s fascinating, this desire to DO SOMETHING for someone we love. It’s like we don’t know what to do when someone doesn’t want to do something everyone always does. And maybe, just maybe, it’s a female thing. Because I know if I told a bunch of dads to not bring a gift, they would be like, “Cool.” And if I told a bunch of dads not to throw me a baby shower (sprinkle!), they would be like, “Yeah, wasn’t planning on anything anyway. So we’re good!”

But it was magical, to watch E and Jessie’s Mom watch Jessie unwrap gifts and ooo and ahh over little baby clothing and bibs and the like. It made them SO HAPPY, which is all I really wanted, to please E (and to show my love for Jessie, even if she probably would rather have napped).

I sent E a text after (her son and grand daughters also came for a bit). This was what she said.

This is how women show their love. They throw parties. They wrap presents. They sweep the floor before guests come over. They bake cakes. They buy gifts. They wrap them. They show up again and again. It’s in our DNA. They show their love. And we should all be “thankful for understanding” that this is just a thing we must do. We give and we receive without complaint. Because it’s coming from a place of love. (And maybe a lllliiiitttttllllleeee bit from our capitalist, consumerist society but mainly just love.)

We can’t fight this, ladies.

(I mean, I can. I can definitely fight it.  If someone tells me not to throw them something or bring a present, I’m basically whooping it up, Arsenio-style. But then again, I’m not a real woman, as I told you in the first paragraph.*)

*This isn’t exactly true because as I was writing this, I remember I helped organize ANOTHER baby shower for a friend who said explicitly she did NOT want a baby shower. But this was her first. And we had to do SOMETHING, right? Like, I am currently thinking about this and I would have felt terrible if we didn’t try to show our love in some way? Argh. Womanhood. It’s a beast.